AGNOSY have been around for quite a few years now and since their third LP is out this year after almost 5 years of silence, we thought it is a good occasion  to talk to Chris about it and present situation in the band plus some plans.  Read on while you wait for the new recordings.

SP:  Tell us a bit about the history of the band.  How did AGNOSY form and what was the connection with BEGINNING OF THE END?

Chris:  Mark, Robert and I played in BEGINNING OF THE END which is the connection with AGNOSY. Aga left BOTE but we decided to keep going, we asked Alex to sing. We also decided to change the name as it obviously sounded quite different with him singing. We started AGNOSY in April 2010

SP:  You released two albums, the last one being released in 2014, so it’s been quite a time now.  Why such a break?  Are you busy with other projects or do you just take it very easy?

Chris: We kind of took it easy and then life got in the way. Mark went off travelling for a few months, then he injured his hand quite badly. He climbed over a gate and when he jumped over his hand caught a metal panel that was on the other side. He slashed it right down to the end of his finger from the middle of his palm. We had to cancel a European tour we had planned, it happened the same day as the last practice before the tour. Obviously we couldn’t practice for months.  Last year we took a break from gigs as Alex became a dad. He and his wife Katri decided to move to Norwich. And Mark moved to Bristol.

SP:  What is AGNOSY up to these days and when can we expect new recording and in what form?

We recorded our third LP a few months ago. It should be out really soon, it will be on vinyl and download. We’ve just got the latest master and everyone seems happy with it. 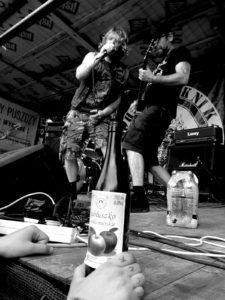 SP:  Are the new songs still in the same metal crust style or are you going to experiment more?

Chris: Pretty much the same style really I would say, apart from a few more rock n roll guitar solos. Maybe it’s a bit more ‘prog crust’ in a few songs. We recorded it live, hopefully it’s given the recording more energy, but you can never recreate the energy of a live gig of course. We spent a lot of effort, time and money on it to try and get it as good as possible.  Lyrics are about hunting, growing fascism around the world, Rojava and the invasion of Afrin and war of course.

SP:  The production of your two albums sounds epic, I can feel that a lot of attention to detail has been put.  Did you work hard on it in the studio or it just happenedlike that?  How did you record it?  Would you say that your sound is closer to metal than punk?

Chris: The first LP was recorded in a small studio in London, the same place where we recorded with BEGINNING OF THE END and the band before BOTE, GIVE UP ALL HOPE. Rob put in a lot of mixing work after the recording, think he got a bit obsessed by it. We were still getting used to our new sound.  “Traits of the Past” we recorded at a friend of Alex’ in Norwich.  We are pretty heavily down tuned but still are firmly in the crust punk category.

SP:  How much has AGNOSY toured so far?  What countries have you played?

Chris: Not as much as I would have liked but we got to go to Mexico which we were very lucky to get the chance. A few tours around Europe and some European festivals. Places I’d like to go in future would be the US and far east.

SP:  Anything to recommend after the tours? Places, venues, bands, festivals?

Chris: I really enjoyed the tour of Finland we did in February 2017 with Viiha. Got to experience a proper winter not the grey damp bollox we have here most of the time. Mexico was awesome of course, food is amazing and lots of people at the gigs. No Sanctuary fest in Croatia, and ultra punx picnic were really nice and well organised. Anytime I go to Berlin it’s great. DIY fest is also mega.  I really like small sweaty gigs though. Some of the best gigs were in The Death drop (Dew Drop pub) squat in south London, long gone though now. We played in Norwich a few years ago, the gig was meant to be in a pub but after a few bands the electricity failed. After realising the power wasn’t coming back we got in our friend Dempsey’s van I drove to the recording studio. Everyone turned up there and the gig was so much fun. 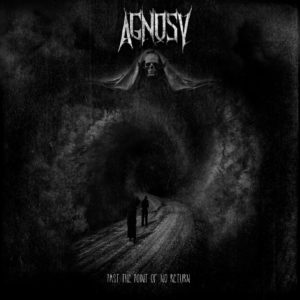 SP:  Chris, you’ve been active in bands for years now, including HEALTH HAZARD, HIATUS or SUFFER.  How do you view the strength of todays DIY punk scene compared to what was happening in the 90’s?

Chris: I spent most of my 90’s hanging out the 1 in 12 club in Bradford, or drunk under a table there. I did tour a lot and I think in Europe the DIY scene is still as organised and as strong as ever. But it’s hard to know for sure if you don’t spend time there. I’ve heard that the punk scene in the far east is very healthy and it seems pretty good in Mexico. Unfortunately it seems the far right scene is growing as well, especially in Europe.

SP:  How different is the UK punk scene now from the 90’s?  Has it got much older?

Chris: Why do you keep going on about the 90’s? You are making me feel really old.  As the scene has got older so have I so my perspective has changed so hard to comment really.Think it’s got a better at looking after bands, probably from bands touring in Europe and  it took a big hit after squatting was made a criminal offence in 2011, well in London anyway. Used to be lots of great squat gig and parties here.

SP:  Is the DIY punk scene getting stronger having influence on the surrounding world or we are just preaching to the converted?  What is your perspective?

Chris: When you look at the state of everything today probably not. Just don’t think it’s big enough to have any influence, real influence. But I think it can change some things on a small level.

SP:  What is your opinion of old punk bands that set the course for many in the previous century coming back after 30 years or so?

Chris:  I can understand why bands reboot themselves and not just start a new band. You can start to play nice festivals and lots of gigs and do it straight away because of the old songs and the name of the band. It’s not really surprising that there are so many lawsuites over band names. Starting a new band is exciting but it takes ages to build up a following. It’s not so nice playing first to a few people. We played in Birmingham to 1 person and the other band…and a dog. I don’t believe in bringing dogs into gigs but on this occasion we needed it.  For a personal example, played bass a few tours with HIATUS in the early 90’s. They released “The Brain” which is a masterpiece and always wished I could have played those songs. So when they did the 3 one off gigs in 2009 and I got to play bass it was amazing. If I hadn’t have been playing I would have been jumping around dancing. Those songs are so fucking good. If the songs really mean something to you it doesn’t matter how long the band has been dormant. 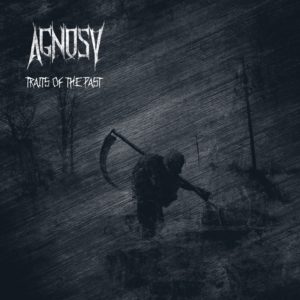 SP:  How do you think Brexit deal is going to affect punk scene in the UK in relation to communication, travel, etc with the rest of the world or it has grown so strong internationally that there are no risks here?

Chris: I’m not sure what restrictions will be put on people wanting to come on tour here or if bands from here want to go on tour in Europe. Maybe bands will have to pretend they are not in a band and not bring their instruments. Maybe they will only let bands in who earn £30 000 each member (the limit they put on workers who want to work in the UK).  No one knows what will happen with anything to do with Brexit, it’s gonna fuck things up for years to come. I think the worst that will happen for the punk scene is people will start to ‘escape’ back to Europe. Hopefully it will all be fine and I’m just “scaremongering”.

SP:  What do you guys do when you don’t play in AGNOSY?

Chris: Mark works for a health food companyas a driver. Alex is a self employed builder and also plays bass in Havaat in Norwich. Robert is a web designer and has started to play guitar in Zerum in Berlin. I’m a visa courier, I like to go mountain biking but it doesn’t happen too often anymore.

Chris: Hopefully we’ll get to do a tour somewhere and play some nice festivals. We have Fear fest planned and a few other gigs so far… 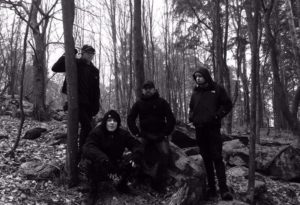 “It’s been pretty sobering how our lyrics are still valid”. Interview with DISAFFECT.

Having played for just a few years back in the 90’s, DISAFFECT

“Why not?” Interview with AXEGRINDER.

“I see a punk or hardcore kid and I identify with them and feel the same connection I did when I was 15”. Interview with Tom Rusnak.

“It’s about being informed, or even wanting to be informed”. Interview with ANTISECT.

Back in the day, ANTISECT were one of those bands you’d call

“Cultural identity is an important part of any society”. Interview with SEDITION.

“Cultural identity is an important part of any society”.  Interview with SEDITION.

Yet another TOP 10 of the passing year, this time