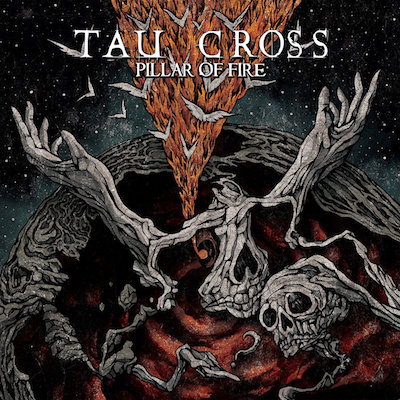 When you do a project, when you are creating something from nothing, people ask themselves this question a lot of times: can you create something totally new, that hasn’t been created yet in the world we live in today?  We always think that everything has been created and invented, so whatever you do is going to be only the xerox copy of something somebody has already done.  So, can you or can you not?  I also ask myself this question a lot.  And I think the answer is very simple: we live in the world where distance does not matter and we have the greatest cabalities of blending things we ever got.  So today, we need to think of ourselves in terms of innovators not inventors.  And then, yes, you have better than ever possibilities to be innovative, to do something new!

And this brings me nicely to Pillar of Fire by TAU CROSS.  And however strange it may sound talking about innovations in music which derives from punk and metal – you have to give this album justice it deserves and call it innovative in punk and metal.  I am not going to remind you the story behind TAU CROSS as I think you already now it.  It’s their second album after all.  But what Rob from AMEBIX, the originator of TAU CROSS idea did, was find the best people he could think of to work with, blend their ideas together and because they all live very far away from each other, he shortened the distance between themselves at an instant by working online.  So, Rob, the innovator in punk?  Yes, I would say so.

The result of these is Pillar of Fire.  Not the debut album, no.  This was the natural consequence of what AMEBIX had done on Sonic Mass, as it was mostly written by Rob Miller.  Pillar of Fire, however, was mainly written by Lefton/Greenslade duo.  And what riffs they’ve written!  You’ve got everything there: fast and slow, moody and in your face, distorted and acoustic.  Add to this a great bass line from a fresh member Tom Radio from FRUSTRATION and you finally get a chance to listen to the AMEBIX guy do the singing rather than amebixing we all got used to, if you know what I mean.  Lyrically, the album takes you back to old, old times where there were knights in the streets but do not let this mislead you.  There are connotation with the present times and this is clever.  Just stop to think about it when you listen.

So, sounds like it a perfect album?  Well, not really.  There is one guy in the band that deserves a lot of attention and Pillar of Fire hides him in the shadow.  Perhaps it’s because of the sound production, perhaps it is just me but I reckon Away from VOI VOD is the heart of the band, and this cannot be heard on this album.  You can clearly see it live when he drives the band in the direction he wants them to travel with him.  On the album, however, it is the guitars and vocals that do the driving.  So, a private request to the band for the third album – make sure you let Away do more driving in the studio.  Thanx.