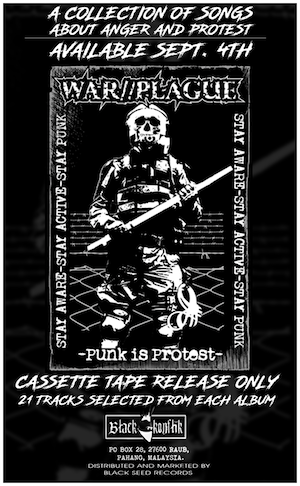 WAR//PLAGUE, a Minneapolis based crust punks will have their first cassette released on 4th Sept.  The cassette will include a selection of 21 tracks chosen from all W//P releases, so it is going to be both, a great introduction to the band for those of you who don’t know them well, and a nice blast from the past for the fans.  The tape will be released by Black Konflik records from Malaysia, and you can get your copy from here: http://blacxkonflik.storenvy.com

BTW, This should also make it into a record of some sort, in my opinion.  And also, where is the discography CD, WAR//PLAGUE?  In the meantime, put your hands on their latest release, a split 7” with WARWOUND on Dr. Strange Records  here