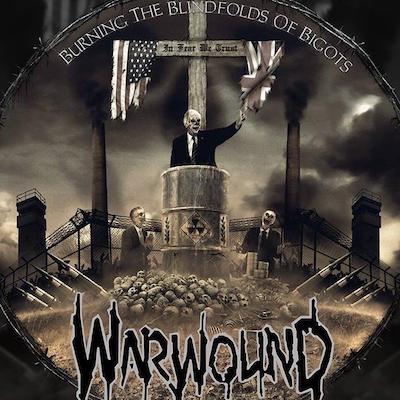 Yeah, right.  What a load of bollocks.  And what a great way to open a great record.  WARWOUND prove they break the rules and make the rules at the same time.  They break the rules because by writing this record they’ve just proved they do not need to follow the old 1982 WARWOUND path and play DISCHARGE style punk, the way it was played back then.  They mix everything they have, to come up with the new almighty WARWOUND.  And what do you have when you form a band from very experienced musicians from SACRILEGE, THE VARUKERS, HELLKRUSHER and DECADENCE WITHIN?  Well, it’s a mixture of metallic guitars straight from SACRILEGE and other metal punk bands.  It’s a solid bass sound, killer drumming and Rat’s vocals you’ve never heard before.  It has moods, it is fast and slow where it has to be like that.  It is angry, it’s metal, it ’s punk, it is not dis- only anymore.  It is just WARWOUND.  Brilliant.

Oh, and they make the rules, by chance.  They show you how to produce a punk record in the 21st c.  Yeah, I know people say it sounds as if it was produced in a laboratory and punk is no laboratory, but hey – I like it that way.  I can hear absolutely everything and I am crushed by the sound.

Each song here is a potential hit, but my favourite ones are: Silence in the House of Gods, The Closing Irony which is a SACRILEGE cover with Tam on vocals and World Gone Crazy.

Record of the year for me.  So far.