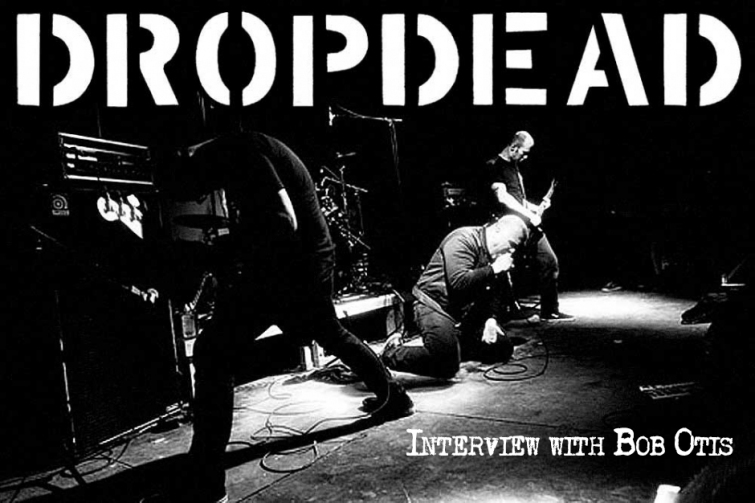 (originally interviewed by Organize and Arise in 2016)

DROPDEAD…by far one of the most important socio/political bands of our time. Starting in 1991, the band has been blasting hardcore punk at the world with a fiercely militant message of animal liberation and human compassion. A subject that will forever be relevant and vital to the punk and underground movement. If you’ve ever seen DROPDEAD, it’s an energy and experience you will never forget. Their message is genuine and needs to be heard…and practiced.

Andy – Thanks for taking the time to do this! First off, I’d like you to introduce yourself for anyone that may be scratching their heads on who you are and secondly, please fill us in on what role you play in Dropdead and any other current or past projects you’ve been a part of.

Bob – I am Bob Otis…singer for DROPDEAD…my past and present bands have been EXTINCTION MACHINE (presently), LOLITA BLACK, I DESTROYER and THE FUZZ.
I also sometimes sit in on vocals with Providence bass and drum legends “Olneyville Sound System”.

Andy – I gotta say, I saw you guys back in, I think it was 92 or 93 at the independent skate park in Colorado Springs. That show had a massive impact on me. I remember when your set was done the fucking mic stand was bent at a 45 degree angle! The intensity and the message in your music had a lasting impression on me. To me, DropDead is animal liberation. The music is so strong and dedicated to animal rights and the rights of others. Can you elaborate on your passion with this subject?

Bob – I’ve always considered myself an animal advocate. From a young age growing up in a house with multiple dogs, cats and rabbits I was taught to care about animals. My mother was a highly empathetic woman and was always taking us as children to feed the ducks…we’d go to petting zoos…and farms. Somehow at a young age I made the connection….where i understood that animals want many of the same things we do as humans…to live in peace…to be free from harm…no not be exploited… to not be enslaved…to not be KILLED. I knew I loved animals and it wasn’t something I wanted to be a part of…. I made the connection with vegetarianism in my late teens ( i wish I had made it sooner) and it helped further my understanding of how exploited animals are on this planet. When I started my first real band (DROPDEAD)…Animal rights was already something I knew I would write about. Thankfully I found 3 other guys who felt the same way…As an adult I have since gone Vegan and try to incorporate the philosophy into my every day life by being politically active, doing vegan outreach, doing DIY feline rescue, doing benefits and of course using this amazing band of life long friends to espouse our political beliefs…and being a voice for the voiceless.

Andy – What have your experiences been like with your audience over the years? Not just live, but the general population as well. Do you get a lot of positive or negative feedback?

Bob – It is one of the touchiest “hot” topics that most bands / people will speak about, even in the punk scene which I consider to be light years more progressive than most scenes. Discuss sexism…people will say it’s wrong…discuss racism…people will say it’s wrong….war  and religion…homophobia, gender politics,left versus right….most people can come to a middle ground. But talk about where food comes from…and the TRUTH behind industrial animal agriculture….or how animals FEEL…and half the room goes dead eyed. We’ve had people break down in tears and thank us for saying what we do…and we’ve had people scream “Fuck You” to our face…sometimes it’s hard to deal with that. But I consider what we do “seeding”…we are planting an idea that we are hoping multiple people will leave with to influence more people. We get  play in front of thousands of people a year…that’s a lot of ears listening whether they like it or not.

Andy – We just played with you outside of Boston recently and it was good to get a quick “hello” in during that gig. How is the response locally for you guys? It seemed folks really got into the energy!

Bob – It was good to see you Andy…as a fan of your bands and a comrade… Locally we’ve always had a lot of love…because we live here maybe people are used to seeing us so we are just the old guys from up the street at this point ha ha! But it still gets crazy for a bunch of “old guys”

Andy– What’s the writing process like for you guys? Do you just blast out a riff and write to it, or is a bit more in depth?

Bob – Ben is pretty thoughtful with working on a riff until its solid before he introduces it. I’ve always thought he was amazing at writing songs that are utterly vicious and total ear worms at the same time. When he’s got it together the band jams on it until it gets tight. I’ll usually sit in and listen multiple times until I get a rhythm or cadence. I’ll record the songs and listen to them multiple times and either write on the spot or access my lyric book that I write new lyrics in and see what fits and what’s meaningful. Not everything is gold.

Andy – In my opinion, Unjustified Murder is one of the greatest DropDead songs and is even more important on the subject at hand. Will you guys continue to push this conversation? The reason for this question is, I’ve seen many vegetarian or vegan folks over the ages drop out and become carnivorous. It’s quite baffling to me and never understood it. Is it laziness or a disconnection?

Bob – As long as we fly the flag as DROPDEAD this will be a part of our conversation…to me it is one of the most urgent and needed messages to be heard as trillions of land and sea animals are dying EVERY year…we are destroying our planet…we are destroying our health…we are destroying our future…but more than ANYTHING…the sentient, living, feeling, earthlings / animals of this beautiful planet  are being enslaved,murdered, tortured and abused, and it CANNOT stand. We will not be silent. As far as dropping “out”, I don’t know how once your eyes are opened you can go back to sleep. I can never walk through a supermarket again and not see the packets of blood and gore. If anything, I feel like I am excruciatingly “plugged in”. I am full of a profound sadness for the world, but it is is equal to my fight, so this is a life long journey for me.

Andy – Correct me if I’m wrong, but you work with people that have developmental disabilities, right? Can you tell us a bit about your role with that and why you work in this field?

Bob – I work for an organization called Resources for Human Development or RHD-RI. We work with developmentally disabled adults and provide day care programing for them as well as a highly developed arts and music program where we have our own in-house artists and art shows…and alsobands and concerts. I have been working in the field for over 15 years…I do it because it feels good to go to work everyday and help people in tangible and very real ways…it’s changing peoples lives for the better…and it feels good to do good.

Andy – What does the future hold for DropDead?

Bob – Next up for us are a few shows here in New England backing up SIEGE / INFEST etc…also some shows with Cleveland bad boys FUCK YOU PAY ME…farther out possible some stints out of the country. Have to look at the calendar…rumors of possible UK dates next year.