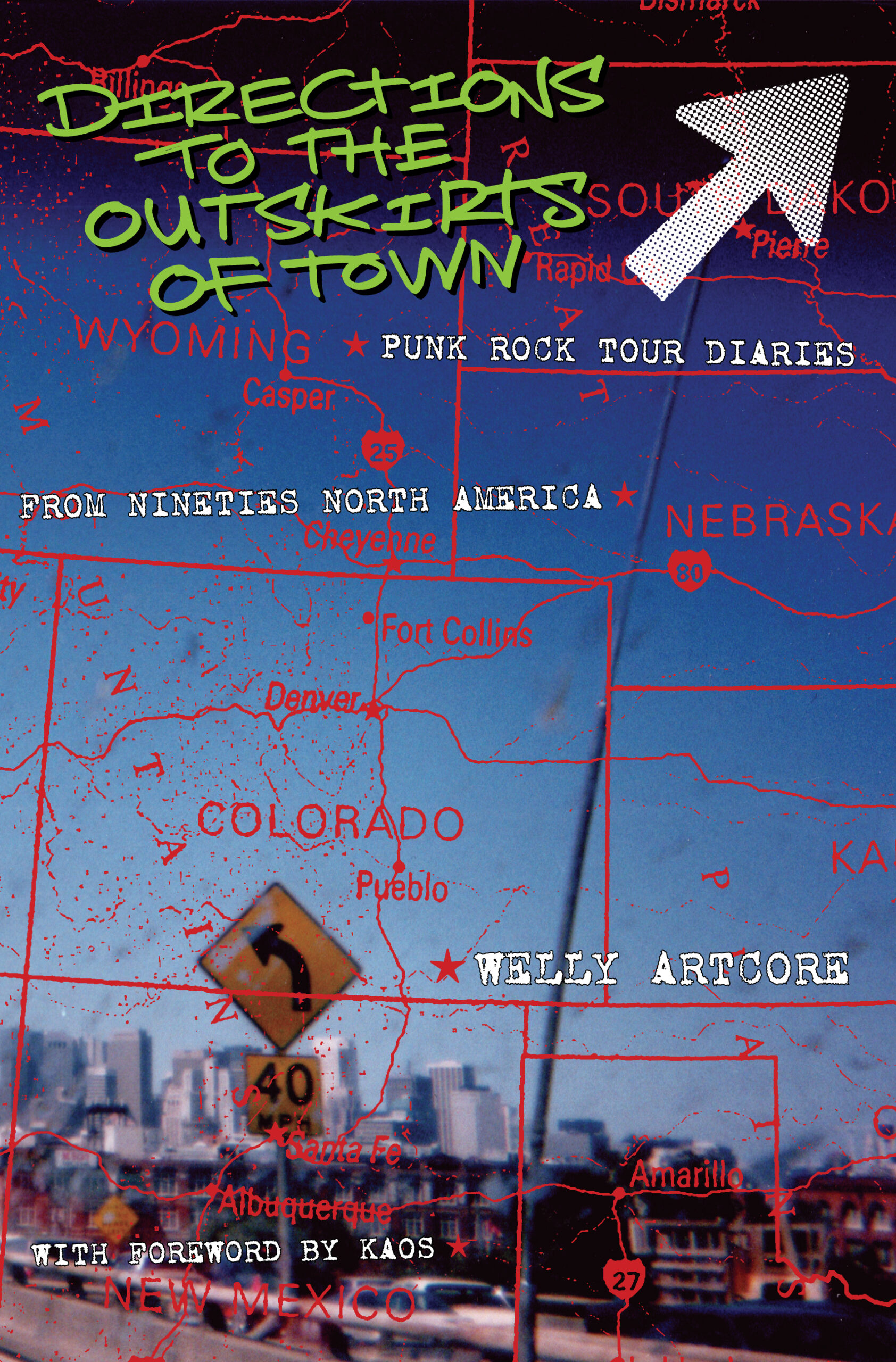 ‘Directions To The Outskirts of Town’

An expanded version of the tour report that first appeared in # 10 of his brilliant zine, Artcore, Welly, the vocalist of (now defunct) Four Letter Word has at last deigned to regale us with the full account of what went down both when he roadied for Chaos UK on their 1994 US tour and when he returned there in 1998 for an extensive tour with his own band, FLW. It comes complete with an amusing foreword from CUK bassist/vocalist (the latter at the time) Chaos – or ‘the Colonel’ as he was known for the duration of this trip – which more than hints at the mayhem about to unfold.

The tone for this raucous tale is more than adequately set as the Chaos UK entourage roll into an aromatic NYC (think cat piss and coffee) to a soundtrack of the Wurzels, and from then on in, the fun – or discomfort thinly disguised as hilarity… take your pick – doesn’t end.

As to be expected if you’re familiar with Welly’s fanzine output, there are lots of scathing critiques of the multitude of support bands (or the ‘bleurgh-aaargh-woof-woof’ brigade, as Welly affectionately refers to them) and many amusingly acerbic and witty asides. The sly humour isn’t solely at the expense of others though, as there is a knowingly self-deprecating streak a mile wide running all the way through this tome.

Reading this, it seems like every UK band touring the US ends up in a cheap sleeping bag from Macy’s, and leaves their passports behind wherever they stay (why would you do that?), and then gets lost in the back of beyond every other day, ending up in the cheapest motel for miles around, flipping coins to see who gets the beds. It also seems that Welly has a similar tour routine to myself, i.e. get up early, grab a shower, get some breakfast and take a stroll around the neighbourhood – all before the rest of the pissheads even wake up!

This US tour bizarrely saw straightedge band Turmoil opening up for our beloved cider-swilling ‘erberts for the first leg (punishment for being on the same label as them!), and then the far more appropriate Eyehategod stepped into the breach to terrify the UK82 punkers called to the slaughter.

Of course, there are plenty of the now-obligatory skirmishes with skinheads, narrow-minded locals (‘You ain’t from round here, are ya, boy?’), thieving punters, dodgy promoters and assorted psychopaths that offer to put up a touring punk rock band (again: why would you do that?), and the band’s incorrigible ‘high-brow’ humour comes across brilliantly as they draw on each other when drunk and spam uptight scene bible Maximum Rock ‘n’ Roll.

The madness that is Texas (‘I survived the circle!’), the state that never ends, gets a look-in, bookended by Nazi skins and teargas and night sticks courtesy of the ever-reliable LAPD, whilst the tale about Marvin being unable to change a broken bass string mid-set is comedy gold, as is the unholy revelation about Glenn Benton of the none-more-evil Deicide’s day-job!

Prepare to have your punk rock icon bubble burst as Neurosis act like dicks, Davey Havok sulks… and Chaos shits himself in a Wendy’s. But there are too many humorous tales to list, including the aptly-named drummer Devil Man copping a firework in the head atop a NYC skyscraper. Welly writes at a brisk clip, the short chapters (one per day) only adding to the momentum of the tale, making this is a real page-turner, all interspersed with some great pictures (including bassist Marvin rocking a Decadence Within T-shirt, bless him!) that really capture the trials and tribulations of touring the punk rock underground.

The Four Letter Word tour is more of the same, i.e. driving, drinking, eating burritos, piss-weak beer, good ol’ boys etc., only with less debauchery and smaller crowds, plus added Bigfoot, ‘artisan’ peanut butter sandwiches, killer whales and temperamental bassists, but is equally as hilarious, primarily due to Welly’s well-timed deadpan delivery. He is brutally honest about lacklustre audience responses and the effects of cabin (or rather van!) fever on individuals thrown into close quarters for weeks on end, not to mention the staple vegan diet of… crisps. And some on-point observations about trying to sleep in a party house after a gig when you’ve been driving for fourteen of the last twenty hours (and usually waking up with your face in a cat litter tray) triggered flashbacks and cold sweats. I’m now racked once again with involuntary images of sleeping on wooden floors in tropical heat and hallucinating due to sleep deprivation…

There are many incidents of driving for days to have gigs cancelled last minute due to the heat or double bookings, which are incredibly frustrating for all underground bands, especially as it’s always the band that takes the hit, plus amusing recollections of basement sex (go, Gram!), alleyway sex and putting dints in the egos of Youth Brigade. The backstage expose of the Warped tour is worth the price of admission alone, and the death metal close encounter this tour comes courtesy of Morbid Angel.

Occasional bursts of articulate, evocative description provide a fine contrast to the incessant punk rock spit and slobber, and remind you that young Wellington is more than capable of stringing a few words together in a pleasingly readable fashion. This is borne out by the poignant and reflective conclusion, which will tug on the heart strings of anyone who’s ever spent more than a week with a gang of (usually) likeminded musicians trekking across a foreign land.

If you have even the slightest interest in either Chaos UK or Four Letter Word, or the DIY punk underground circuit and USHC music, or even what it’s like to lose yourself in a fever dream deep in the dark underbelly of the States, this book should be top of your to-read list.