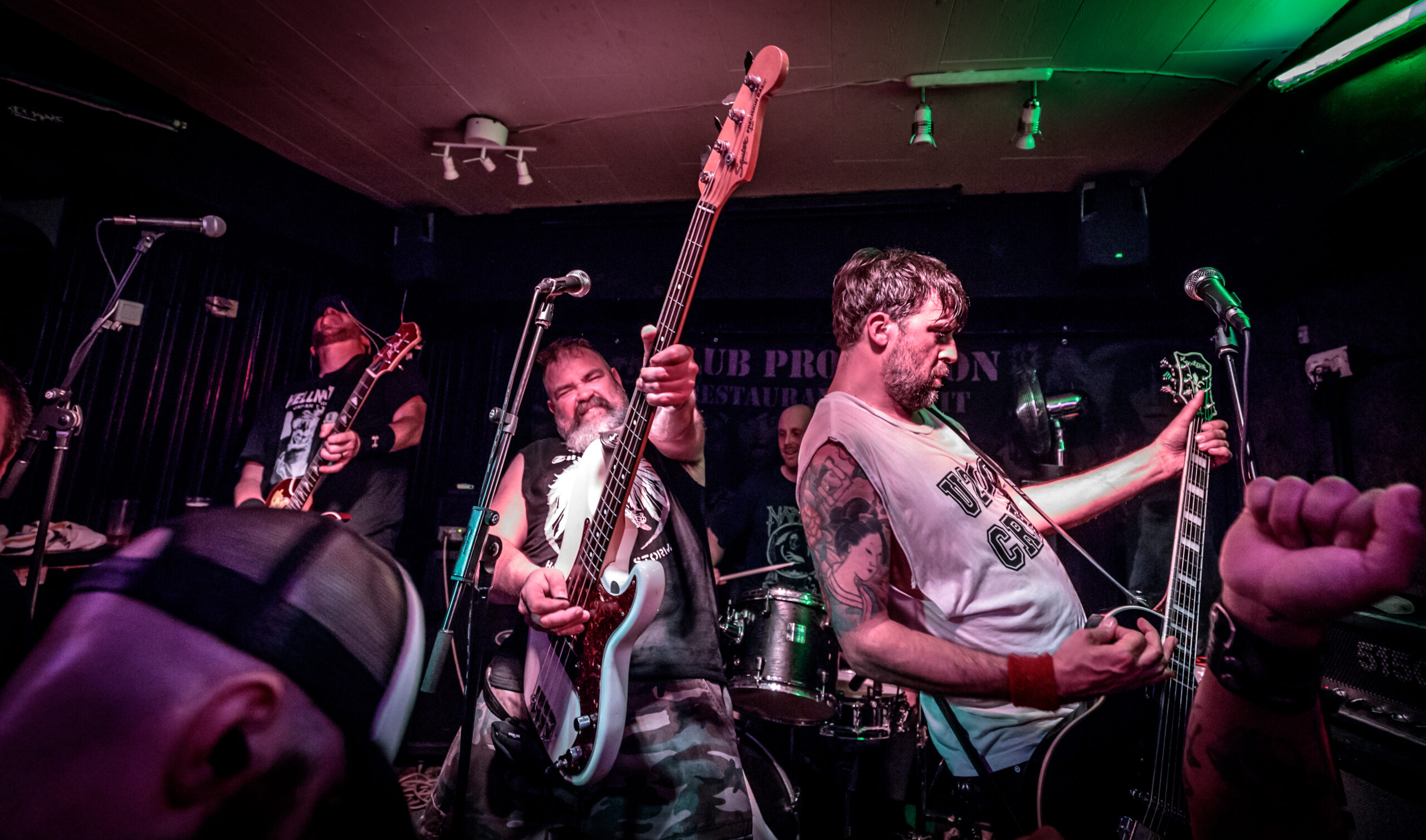 Massgrav’s new album turns out to be one of the best punk releases in years. The band is still going really strong (or stronger than ever) and they keep the sense of humour and yet still they touch some very serious topic. I’ve decided to ask Ola couple of questions.

Hi Ola! First of all, congratulations on “Slowly We Rock”. One of the coolest punk albums that I’ve heard in years. Are you satisfied with this record? A lot of things changed, I don’t want to say that Massgrav became more ambitious, but clearly there are some new influences and you had a lot of fun writing it.

Hello! Yes, we are satisfied, absolutely. Glad you like it. We’re happy both with the songs and – for once – the production. Also, we’ve started working with Lixiviat Records on this album and that added a bit more enthusiasm too, so that’s great. I don’t know if we’ve gotten more ambitious or not but I think as you get older and get sick of coming up with almost the same song again and again, you tend to maybe widen your musical horizons a little bit, so possibly that’s what you’re hearing. That said, I think the songs we’ve written for the next album are better. That may just be because they feel newer and more fresh, but it could also be because they’re better.

It’s good (at least for someone who is not a swedish speaker) that you have added some english notes to the lyrics. And it seems that you’re still angry about some social issues. Do you think that anything will change? What’s the chance that one day punk bands will run out of topics for angry lyrics?

The chance is about zero I think. Sweden just got 10 times more fucked up when the conservatives won the election, backed by the right wing assholes who are now the second largest party in Sweden. So these are the clowns that are supposed to guide our country through what is shaping up to be a whopper of a recession, with the situation with Russia added into the mix. I think there will be plenty to be upset about. Glad you like the short explanations. It’s hard to find the right length, they are a bit simplified of course, but at least you get an idea about what we sing about. I guess Google Translate would be another option for those who want to know.

“Stockholm Rockers” is a great album but right now it sounds like a totally different band. What’s the reason why Massgrav evolved so much during the last years?

First of all I think you’re wrong. I think there’s a straight line from Still the Kings, through Stockholm Rockers to this album, but I think it may be perceived as a larger difference than it really is, musically. The big difference is that this album sounds a lot better so you can hear what the hell we’re doing. Then again, we added another guitarist so of course we’re going to sound a bit different, he added a lot of nice touches. But if Stockholm Rockers had the same production as Slowly we Rock, I don’t think you would experience quite the same difference.

You have a really good way of sharing vocal duties and often doing it in a surprising way. I was wondering how does it sound live – are you still strictly following who’s singing which part or do you have some field for improvisation?

99 percent of the time, there’s no room for improvisation. Improvisation is for hippies who play slow. When you play fast, you need to know who does what or it all falls apart. The only time we sway away from the plan is if one of us runs into trouble, like if the mike stand vanishes into the audience and shit, then the other person will step up and sing all parts, but that’s about it. Norse lost his voice halfway through a gig once so I tried to do all the vocals in the second half, which is… a lot of work. But live, it pretty much sounds like on the recordings, except some songs where we changed it to something that worked better. And as for the original split of vocal duties, we try to do it in a way that maximizes the intensity mostly.

What’s the best band from Sweden in your opinion? Swedish scene is massive and a top quality, both when it comes to punk and metal. What would be your number 1 pick?

I absolutely love Brann Ostermalm video. It’s funny, entertaining and still shows a lot of “eat the rich” mentality. What’s the story behind this video??

Ugo from our record label got in touch and was interested in doing a video. I had been toying with the idea of ripping off old czech republic animated film so he took that idea and ran with it. We asked him to incorporate the vivid colors of the album cover, explained the lyrics to him and then he took over and created what you see. I think it’s hard to give directions to people who you’re cooperating with on creative matters – you don’t want to steer them with a heavy hand but at the same time I’m too much of a control freak to say “do whatever you want”. I think it turned out great, it is a reflection of how we are – dead serious but still with the ability to joke, you know?

In one of the articles regarding Massgrav I found information that in your case everything started with Discharge. What do you think about their more recent materials. Would you call Discharge the best punk band ever?

I’m really sorry but the information you found was a joke, making fun of all the Discharge worshippers in the world. They never meant shit to us. Everything started with Mob 47 and Hellnation. If you asked me to list the 100 best punk bands, Discharge would not be on that list.

Not long time ago I’ve read a polish book about rise of nationalism and far-right politicians in modern Sweden. Is your society really changing so much? What might be the cause of it and is there anything done to fight against it?

Let’s just start by stating we’re neither politics experts nor geniuses. That said, yes – Sweden seems to have changed a whole lot. If you ask me about the cause, I would say that left and right-based governments alike have been dismantling the Swedish model for at least 30 years, privatizing and centralizing and chipping away at the security net that our society used to be, landing us in a reality where the gap between classes are bigger than they have been for a very very long time. Enter a bunch of assholes who A) don’t want to take responsibility for this and B) don’t want you to think that the above has anything to do with schools and hospitals deteriorating and it’s very convenient to blame immigrants instead. Sweden has been an open country, accepting rather large numbers of immigrants and integration is a complicated task, especially when you’re dismounting everything that is tax financed, so there are definitely problems to solve. Do we solve them by turning into a fascist tax haven? I don’t think so, personally. Is there anything done to fight against it? Yes, absolutely, and I imagine you recognize our situation too? However, there are still a large number of people who think that nationalism was able to gain ground because the society at large distanced themselves from the far right, that they would disappear if we would just be open about these questions. Me, I think that’s fencewalking and I want no part of it – I think we should continue to make it clear that it’s an unacceptable way of thinking. Thanks for asking, we rarely get asked important questions.

Although the cover art is nice and (kinda) fits the music I still need to ask….why snake?

Well… it’s hard to explain. I was really into cobras for a short while. And we weren’t exactly sober when the idea was formed. There’s something to be found in the cover art about the fastness of a cobra in contrast with the title and then also the music. Sometimes rocking slowly, sometimes reptilian speed. But mainly it’s a tribute to the old velvet cobra poster if you’ve seen it? We worked with a countryman of yours, Raf, and not for the first time. Very talented guy, I’m super happy with the way he interpreted the idea.

So now that you have a new album – what are the touring plans? And what’s more important- when can we expect dates in Poland?

At the moment, our only confirmed plan is playing Bloodshed Fest in 2023 and a few gigs in Sweden, but hopefully we’ll be able to do some festivals in the summer. As for touring per se… we’re not much of a touring band – we like to do long weekends at the most. Being in a band has to be a positive thing in your life or you will quit, and spending too long in a van, needing a shower, being drunk for the 10th day in a row… it just hasn’t ever been an interest of ours. At least for some of us – when I think about it, I guess half the band has done that very thing in other bands.

And Poland? We would love to come back to Poland. We have played fests in Warsaw and Gdynia and they were both a lot of fun, it would be great to be able to make it back. Ask your local promotor to book us, we don’t do a lot of outreach work, we play when people ask us and the conditions are right.

All photos by Urban Skytt.