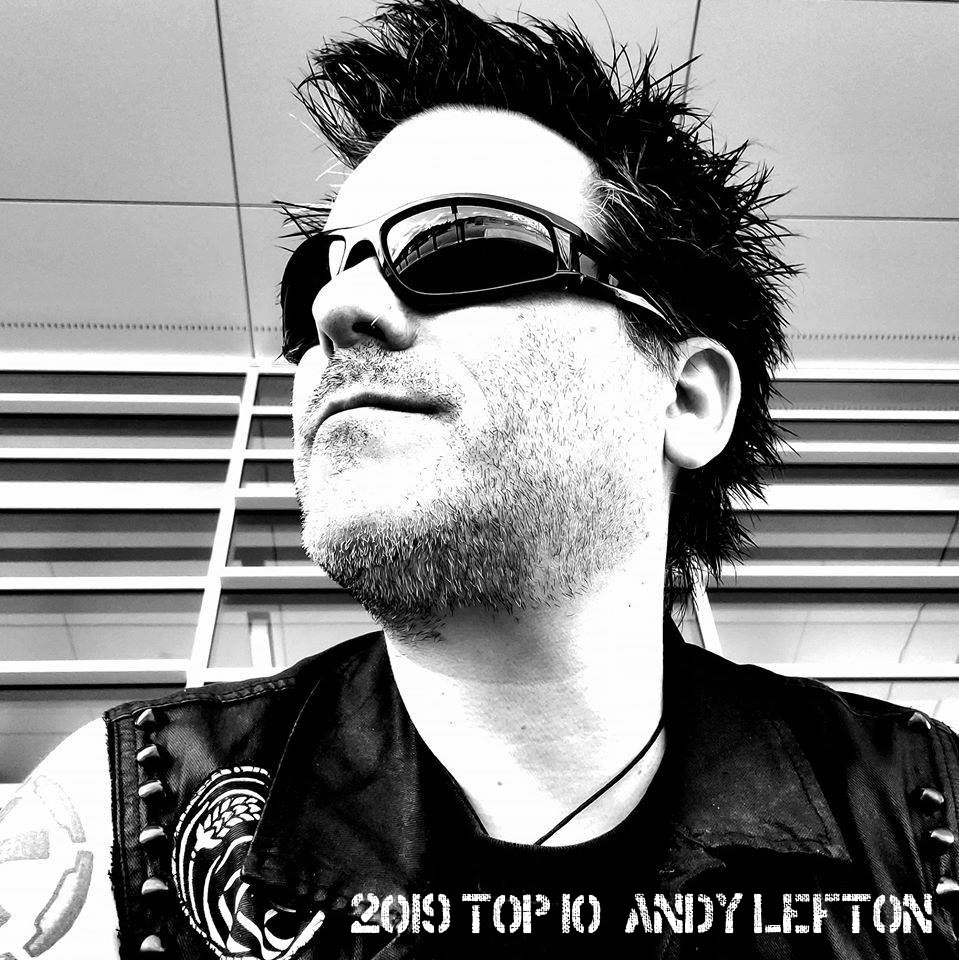 Here at SANCTUS PROPAGANDA we believe that sharing your musical tastes with the community gives others a broader perspective, a chance to make up for what you missed in your busy life and most of all, appreciate each other’s work.  This time we asked Andy Lefton, the guitarist for WAR//PLAGUE and a visual artist to share with us his thoughts on punk in today’s crazy world and what his battery chargers in the previous years were.  And there is no better time to ask than the New Year!  In the meantime, check the latest WAR//PLAGUE album on Phobia Records which we reviewed here and Andy great art portfolio.

If there’s ever a time that punk is needed, it’s now. Not to change the world, but to give a sense of belonging in a world that’s striving for abandonment. During the Reagan/Thatcher era we experienced a time in our history where our lives were at stake, and there was nothing you or our families could do about it.

Now we’re living in a time where there’s no control or sense of sanity no matter what corner we turn or how many albums we put out. It’s no longer a matter of what we can do, but a matter of how we survive it. The upper echelons that control, bleed and ruin this world will have their way. Violence, manipulation and hate are gaining the upper hand all the messages that our punk ancestors warned us about have become a reality.

The greatest thing we have going for us at this moment is our free thought and independence from the systematic ravages that have plagued this place. We stand and witness the savage onslaught of media creating the bias that has divided everyone, but that doesn’t mean we have to subscribe to it. The music we create and the energy we capture in the lyrics is something that separates us from that world of vile cruelty. We create community where we can all come together and work for something better while the depraved system works to eat itself. I wish for you all to have a good New Year and hope for the best decade to come for us all!

I’ve been in search for something like this for a very long time. Punk is education, it’s how I learned why the world operates as it does. Peace punk is an important element that brings to light the horrors of the world and what we can do to work for a better place to live. The Conscripts do what CRASS, Flux of Pink Indians, Omega Tribe, etc have done for us. They recognize the sounds and message that is so vitally important to our cause. This band is fantastic.

Sweden is one of the epicenters for all things punk, and Larma does everything I’d want from that corner of our globe. Larma gives us what punk is supposed to be, straight up punk aggro with a hit of adrenaline that reinforces how punk rock is done.  This is good because they don’t carbon copy anything, they stick to the native sound and it makes them stand out without being trendy. Fans of Skitkids, Desperat, etc, take note! This album is a requirement.

There’s been a hodgepodge of death rock, post-punk…whatever the latest fad is that’s surfaced over the last decade but few have stuck to stake the claim. The Wraith have succeeded at this. Although it’s overused, there’s a definite Killing Joke vibe overall. Many more elements can be found in this album but what stands out the most is that it’s great music!

VoW have stood out as being one of the longest running and dedicated crust bands this century. Crust punk is a genre that I can say is more towards my leanings. It’s punk with a metallic edge and VoW deliver this with their signature dual vocal delivery. This particular release is a teaser, so we’re not getting the whole enchilada here, but does lead us on to think something very awesome is around the corner! Very stoked on this and will be keeping my ears open for more news.

This project needs way more attention as it’s the work of one person, Marziona Silvani who’s known for her drumming in the Italian Dbeat masters Kontatto. This stands out as she has done everything you hear…everything. Marzia was gracious enough to send me a cassette package that was thoughtfully put together. This isn’t manic crust dbeat punk, but more gloomy doomy work that very thought provoking (Fans of Iowaska, take note). The title track “Sisters of Darkness” has a long introduction, but once everything kicks in around the 2 minute marker, it really sets the mood. Listen to this, it’s powerful.

Crutches nail it…EVERY TIME! Blasting Dbeat punk that stands out from most these days. It’s a band that has a signature sound that breaks the mold of punk monotony with ripping guitar riffs, blazing drums and piercing vocals that’ll give the adrenaline a good boost. Kontrasosial from Indonesia give a presentation that’s heavy hitting in the hardcore punk arena. These tracks have a definite fist pumping effect and torment the senses with buzzing guitars, pulverizing dbeat and grinding bass. An essential listen to every single punk rocker.

Goddamn this is good! A bit more thought provoking in the writing as it’s falls in the melodic Dbeat crust realm, think Tragedy or Kortavrese with a bit of Fall of Efrafa. Great production, but not over done or sterile. This is good writing and the lyrical content is spot on with the political climate of the world. There’s a load of fuel in this album to stand out from the rest. Essential listening, get on this!

This is a teaser track from Sweden’s all mighty Misantropic. This band has always had a place in my heart since their inception. Amazing metallic crust punk that brings me back to the days of Sacrilege with intense hard driving riffs and female vocals. This particular track has an intense gang vocal chorus that will bring you to the front of the stage with fist in the air. The power in the song is by design as it’s targeting religious tyranny and begs to give thought towards the atrocities happening in Rojava, among other places in the world. To top it off, they thoughtfully put a break in the song that gives way to some great violin. This is one track from their forthcoming LP “Catharsis”. Can’t fucking wait for it!

These guys are fuckin’ killing it! Genogeist crawled out of the Portland sludge making some of the best crust to date. There’s some mid tempo stench here and that why I love and appreciate what these folks are doing. Vocals consist of dual growls (think Visions of War) hammering guitar riffs that have a damn good catch to them, some solos that aren’t overly complicated but fit the niche quite well. This has a definite SDS feel (scum system kill era) with a smidge of Global Holocaust thrown in. This is why our pants are shiny.

Adrestia – The Wrath of Euphrates LP

This band was on constant rotation during our tour. Adrestia are a band that has a certain formula that stands out, I can’t quite put my finger on it, but overall the musicianship is fantastic! Nothing is being reinvented here, but the way things are layered in the music, it’s creates a storm of hardcore punk mayhem that has a touch of early Scandinavian death metal. Another nice addition is that they have Tomas of Anti-Cimex doing guest vocals. A great listen for those that appreciate finer Swedish things in life.

There are just too many to mention as 2019 had a lot of releases. Some I worked on and want to avoid bias, and others just don’t have enough space to add in. I could easily do a list of 50 and that still wouldn’t cover them all. Regardless, if your release was in the spirit of our DIY community and work for cooperation and not competition, you’ll always be on the list!