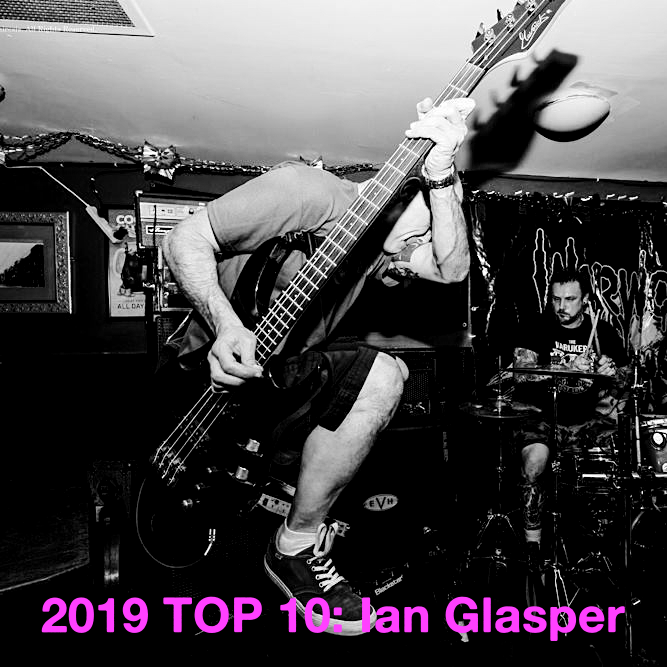 Yet another TOP 10 of the passing year, this time (like last year) from Ian Glasper, bassist for WARWOUND (whose 2nd LP is out soon, in the beginning of 2020) and author of books on punk, hardcore and thrash.  His latest book, “Contract In Blood: A History Of UK Thrash Metal” is still available from Chery Red Records.

In no particular order…

Cliterati blew me away when they put on and played with Warwound in Portland in December 2018, and I couldn’t wait to hear a full album from them. Thrashin’ and powerful, pissed off and catchy, and with so much to say so eloquently, Cliterati are exactly what punk needs in this day and age of indifference and intolerance. Perfectly formed rage.

Back in the Eighties, I loved all the Possessed albums, and this was probably my most-anticipated release of 2019, although deep down I doubted they could even come close to the visceral qualities that drew me to ‘Beyond The Gates’ over thirty years ago. Thankfully I was proved completely wrong, and they delivered a perfect Possessed album, upgraded slightly for the modern ear but retaining everything we adored about the original band. Even the drumming, whilst now far superior to the primitive efforts of Mike Sus back in the day, maintains his deranged charm and off-kilter phrasing. And no one growls ‘Satan’ quite like Jeff Becerra.

I already dug Orphanage Named Earth, but after I saw them live during summer 2019, it all made sense to me: their huge slow-build arrangements, the melancholic melodies, the almost unbearable dynamic tension they skilfully ratchet up that eventually culminates in a thrashing cathartic release. This isn’t music for people with a short attention span, but if you invest the time it deserves in it, ‘Saudade’ pays off dividends.

One of my favourite albums of the year, this mesmerises from start to finish. The cover screams ‘Crass’ but the music is unashamedly retro gothic post-punk, equal parts Killing Joke, UK Decay and Samhain, all tribal rhythms, jagged discordant guitars and bitter-sweet soliloquies to the night. Bleak, brilliant and powerful.

This anarcho band from rural Dorset really made me sit up and listen when they released this MLP, because it combined all my favourite styles from the Eighties anarcho punk scene – Subhumans, Instigators, Rudimentary Peni, The Mob etc. – but brought them all up to date with a great sound and relevant lyrics. I’d been listening to the band for several years since they reformed, and their recent EPs have always been good, solid efforts, but ‘Pathogens’ finally sees them fulfilling their potential.

They now take longer over albums than Metallica (!) but Subhumans never disappoint. They’re one of the few bands around that still like to break new songs into their set before recording them, so if you’re a regular at their frequent gigs, you’d heard most of the material before it was finally immortalised on ‘Crisis Point’ – and you already knew it was going to be a great album. In fact, ‘Thought Is Free’ (specifically the climactic outro section) is one of my favourite Subhumans moments ever. No mean feat when you’ve been around this long, but it just goes to show that if you stay true to yourself and your roots, and you have this much natural talent in your band, the song-writing well never runs dry.

With every member of this band being ex-English Dogs, it was inevitable Unholy Alliance would bear some similarities to that great band (both the ‘metal’ and ‘punk’ versions of it), but UA also managed to stamp some of their own personality on this set of new tunes, that bodes well for their future. Great musicianship, especially from Lemmy-esque bassist Tat, and a powerful production cemented this as a very convincing punk/metal debut.

How can anyone not love an album with song titles like ‘Millions Of Dead Goths’, ‘Nappy Thrash’ and ‘Stop Being a Racist Cunt’? The Welsh answer to Municipal Waste – only funnier – Pizza Tramp are always guaranteed to be a total hoot live, and whilst their recorded material can’t possibly fully capture such madcap energy, it still holds up incredibly well, and the incendiary crossover of ‘Grand Relapse’ (taking the piss out of their Welsh mates, Grand Collapse, of course) is their best yet.

Agnosy – ‘When Daylight Reveals The Torture’

The superb third album from one of the best crust punk bands out there, this really scratched my Scandi-itch as it mixes up all the best bits from Anti-Cimex, Entombed and Unleashed. The new Wolfbrigade nearly made this top ten as well, but this one even edged that out…!

Don’t be fooled by the name, this is no kvlt black metal band, this is Candlemass and Solitude Aeturnus worship of the very highest order. There’s nothing like a bit of classic regal doom, but genuinely strong albums are few and far between, so I get rather excited when I find one. Thanks to Kat Shevil Gilham for the heads-up on this one!